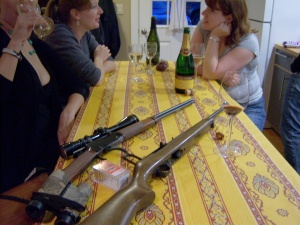 During the past weekend, Christine and I had some friends over at the cottage for dinner. It was a typical, breezy evening in Carneros and we started off with drinks outside on the patio. When our friends Kate and Justin showed up, I should not have been surprised that Justin had brought his .17 rifle along. The sight of a couple of jackrabbits off in the vineyards got him primed for some shooting. I had never shot a .17 before and found it similar to a .22 magnum. His .17 had a smooth lever action and a dialed in scope. I had read quite a bit about the .17’s high velocity and how that translates into accuracy and can attest it’s true. I brought out my Ruger 10/22, a classic albeit a bit boring. We had a good time shooting (and missing) at the rabbits that are really more like vermin than lil johnny cotton tail and then had fun setting up and knocking down some beer cans.

For dinner I grilled up some tri tip and asparagus and Christine made a cilantro rice dish with queso fresco. I tried something new with the tri tip this time, I slow cooked it on a Weber with mesquite wood chips. I’ve never really believed that a handful of wood chips would translate into real smoky flavor but I was wrong. I slow cooked two roasts using indirect heat and sprinkled the water soaked chips on the hot coals. I changed the chips after flipping the meat over, after about 40 minutes of cooking. After about a hour and a half of cooking, the meat had that deep, dark color of barbecue and also a lovely aroma and taste of mesquite smoke. I’m not a complete convert to slow, low and smoky — because gas is just so much easier — but I have to admit that wood chips really do bring the flavor. I’ve got an old Weber at the house in Lodi and I think my next grilling adventure will be slow cooked brisket.

After dinner we did a little more shooting, (Christine even shot a few rounds with the .17) and then played some board games. Now, Bennie had brought over several different bottles of wine from his collection and I was a bit enthusiastic in my approach to tasting as many as possible. Justin and Kate, I swear next time I’ll make it through a round of Cranium, I swear!

The penance for my overindulgence was spending the next morning picking up spent brass with a raging, raging red wine headache.