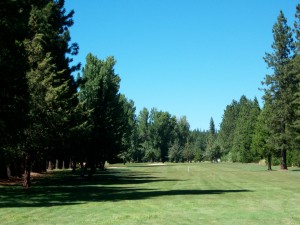 The first tee at Meadowmont Golf Course in Arnold.

As I drove up into the Sierra Nevada foothills on Highway 4, passing logging trucks left a perfume of fresh cut wood as they roared by me in the opposite lane.

I had the day off from work in light of the recent Fourth of July holiday and was looking to enjoy some mountain air and some free time. A few years ago, my family rented a cabin in Arnold, Calif. about two hours east of Lodi. Near our rented cabin was a rustic nine hole golf course on the side of the highway. Rather unremarkable aside from the fact the course began and ended at one of the best independent breweries I had ever visited. Snowshoe Brewing Co. is located in the old clubhouse of the golf course and its cozy taproom and restaurant has views onto the first tee and ninth hole.

During my first visit I resolved to come back again and play the course and enjoy some pints, and the holiday weekend gave me the perfect opportunity.

The golf course is marked by rolling hills and several long fairways and tight greens. I gave up keeping score at the third hole (hey this ain’t a golf blog) and just concentrated on improving my drives and enjoying the sunshine and refreshing breeze. I wrapped up my round in about two hours at just after 3:30 p.m. but had to cool my heels a bit because it was a Monday and the brewery didn’t open until 4 p.m. I was a little worried that I’d look like a dork strolling in at 4:01 when the place opened but I need not have worried. As I sat waiting on the tailgate of my truck, I watched  several other groups of people walk up to the door and decide to wait too.

Once the brewery opened, I sat down on a stool and ordered the sampler. This is a selection of seven, four ounce tastes of everything the brewery is pouring. The beers ranged from the light Snoweizen to a gnarly Grizzly Brown Ale that is made from five different malts including a touch of roasted malt. Snowshoe opened in 1995 in Arnold and at one time had a second brewery in Sonora. The second brewery has been sold, and it’s still hard to find Snowshoe beers outside of the foothills. My personal favorite is the Thompson Pale Ale, which is a crisp, medium bodied ale that has a strong backing of Cascade hops and a smooth finish. The beer takes its name from the legendary “Snowshoe Thompson” a Norwegian immigrant who traversed the Sierras on a weekly basis to deliver mail from 1856 to 1876. Many of the Sierra’s folk heros can be found honored in Snowshoe’s beers and on its menu. There’s the Monte Wolf burger, a tribute to one of the last true mountain men, and my dinner selection, which was the Joaquin Murrieta burger. Murrieta was a bandit considered by many to be the Robin Hood of the San Joaquin Valley and foothills. The burger version of the legend is a 1/3 pound patty with pepper jack cheese smothered in salsa and guacamole.

The beer and the food was excellent but one of the more enjoyable aspects was the casual conversation at the bar. I sipped a cool Snoweizen with lemon and watched big, fat dragonflies zip back and forth in front of the windows looking onto the ninth hole. The woman next to me remarked that the dragonflies just seemed to have appeared. She and the bartender both thought there had been quite a few more bugs this summer. Perhaps it had to do with the spring rains, but then it was getting harder to understand the weather. One used to be able to count on snow by Thanksgiving but now you had to cross your fingers for snow by Christmas.

The golf, beer, food and wonderful atmosphere really do make a visit to Snowshoe worth the trek.