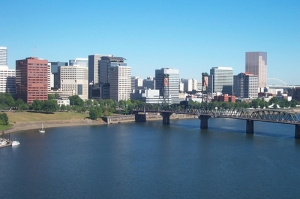 The team was in Oregon for a couple of days as part of a quick trip through my old stomping grounds in the Beaver State. We had hoped to get a respite from the heat of a California summer but instead found ourselves in the midst of an Oregon heat wave.

After settling in at our room at the rather forgettable downtown Hilton, I took a long walk through the city’s core. When I attended the University of Oregon, my time in Portland was spent either going to the airport or attending a conference or a job interview. I hadn’t spent much time as a tourist and the goal of this trip was to try and get a better sense of the city itself. As I wandered along I found that Portland had been suffering through the economic downturn. Streets in the once trendy Pearl District were lined by vacant storefronts and towering condos — built in the frenzied boom years — now stood dark and empty.

There’s still a push by locals to “keep Portland weird” and retain their city’s eccentricities in the face of economic redevelopment and transplants from, gasp, California! The city is definitely weird, but it seems that local weirdness has been best protected by our protracted recession than the efforts of tattooed, homeless drug addicts.

Continuing my walk through Stumptown, (Portland’s unofficial nickname) I was getting a little bummed by what seemed to have befallen the city I remembered as being so vibrant. Noticing some activity a few blocks over I headed in that direction and soon found myself in the Skidmore neighborhood Saturday market. Here was the vibrancy I had been missing. Hippies, hipsters, hoods, young parents and old folks all mingling in a mix of open-air craft stalls and food vendors. I could feel the unique, funky beat of the music of Portland and I liked it.

The market led to the Burnside bridge and the riverfront walkway. I took a stroll along the river enjoying the sunshine and people watching. It was fun to see ski boats pulling wake boarders and tubes on the Willamette River through the heart of downtown Portland. (You wouldn’t want to do that on the Hudson.)

I met up with Christine back at the hotel and we decided to cross the river and head over to the Hawthorne neighborhood, which is home to Apizza Scholls. A trendy but legendary pizzeria that proved to have some awesome pizza. They only allow you to choose three toppings for your pie — to retain the true pizza taste — and Christine and I opted for Nicoise olives, onions and home made sausage. The crust was light with a crisp texture and it had plenty of substance to give the rich toppings a strong foundation.

The waiter challenged me to finish the last two pieces. He didn't need to challenge me my friends. Before we started our meal, I knew there'd be no leftovers.

We chose a simple but eloquent Italian Barbera to pair with our pizza. Christine fell in love with the place and quickly declared it to be the best she had ever tasted. I equivocated a bit saying, “well there was this little place I found in Florence,” but she quickly called me on my pretentiousness and we agreed it was the best pizza we’d ever tasted.

After pizza, we dropped by a cool looking night club that turned out to have some of the worst stand up comedy I’ve ever been subjected to and then crossed back over the river to downtown and our hotel.

(Coming up soon: wine tasting in the Oregon countryside, enjoying the luxe life in Portland, the best microbrews ever and a pristine mountain lake.)