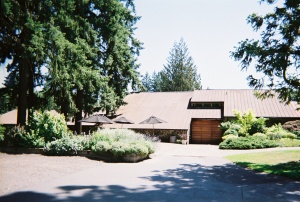 On our second day in Portland we met up with some friends for lunch in the suburb of Hillsboro and reminisced about our days when all of us lived out on the coast in Astoria. Hillsboro is located near the northern edge of the Willamette Valley wine country so after lunch Christine and I decided to visit a few wineries, including Ponzi Vineyards. The walls of Ponzi’s modern looking tasting room are decorated with the menus from various state meals, including a few White House dinners from the last three administrations, during which Ponzi was served.

The weather being so pleasant Christine and I opted for buying a bottle of wine and heading outside to play bocce ball and sit in the shade. We decided to try Ponzi’s Arneis because neither of us had ever tried the varietal. That’s not surprising as Ponzi is the only Oregon winery and one of only three wineries in the U.S. that makes wine from the ancient Italian grape.

We purchased a bottle for $20 and headed out to the bocce courts that were framed by tall pines and vineyards. The wine displayed an interesting mix of fruit flavors and acidity and proved to be the perfect complement for a warm summer day. After some desultory rounds of bocce, Christine and I just decided to sit in the shade of our patio table’s umbrella and enjoy our bottle of wine.

After a pleasant drive through the countryside back to Portland, Christine and I checked into our second hotel in Portland. She was able to score an amazing bargain on a room at the new luxury hotel The Nines. The hotel was a stunner. Beautiful rooms, wonderful amenities and a gorgeous restaurant located in the hotel’s sunny atrium.

That night we decided on Henry’s 12th Street Tavern for dinner. The food was OK but the real attraction of the restaurant was its beer list with more than 100 choices. I was able to try a pint of the famous Dogfish IPA out of Delaware (that tasted a little odd, I’ll stay with my West Coast IPAs) and Christine tried a light wheat beer from Minnosota. The place is located in the historic Henry Weinhard’s brewery and we snapped a photo of the brewery’s old smokestack.

We spent the rest of the evening taking a roundabout walk back to our hotel and came upon a guy getting a grill started on the sidewalk in front of a jazz club. Intriqued, Christine and I ducked into the place and soon found ourselves listening to a wonderful jazz singer as wafts of barbecue drifted in off the street. I’ve lived in small towns almost my entire life and I’ve always loved the rural lifestyle. But as I sat in that jazz club listening to a soulful and passionate singer backed up by a wonderful band, I could see the benefits of a living in the big city. When the band took a break the singer and other musicians grabbed drinks and had some smokes with the audience outside as the club staff walked from table to table getting barbecue orders.

An interesting end to our last night in Portland. The next day we’d be heading south to Eugene.