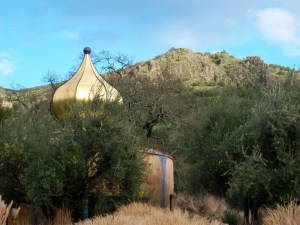 The distinctive cupola of Quixote Winery peeks out from trees in front of the cliffs of the Stags Leap district in Napa Valley.

A buddy and me were just driving along Silverado Trail in Napa recently without any plans and time to kill when he suggested we check out Quixote Winery. A few years ago, my friend John had installed wireless internet at the winery and he remembered the winery’s wild architecture.

As luck would have it the winery, which is usually only open for tastings by reservation, had opened its doors  to the public for tastings that afternoon. Quixote Winery is worth a visit just to look at the grounds and the winery, but the wines turned out to be quite good too.

The building has no straight lines and is decorated with tiles and glass painted in bright shades of blue, yellow, red and other colors. My friend and I felt a little sheepish walking into such an artistic and sophisticated tasting room wearing jeans and sneakers, but we were quickly welcomed by the enthusiastic tasting host named René. (Funny side note, John thought René said his name was Ernie when he said hello and so he sat through the hour-long tasting wondering how a Swiss dude picked up the name Ernie.)

Tasting at Quixote feels like being inside a work of art and it actually quite literally is. René explained to us in detail how the building was designed by Austrian artist Hundertwasser. I’m no art student and my art appreciation is pretty poor, but René had a book of Hundertwasser’s art for us to enjoy and we received a quick tutorial on the Austrian’s bold works of contemporary art. The artist created several building projects in Europe but Quixote Winery is his only American piece and after finishing the winery Hundertwasser passed away. The building reflects his style of no straight lines, a “living roof” planted with trees and grass, and cupolas and towers dotting the structure. I had thought I would find it uncomfortable and intimidating to taste in such an artistic building but instead found it to be a warm and inviting atmosphere for a tasting.

It's a cool scene at Quixote Winery. I didn't see any windmills though.

And the wine was great. Our tasting cost $20 each (the tasting fee was waived with a purchase) and included four vintages. We started with a Cab that was quite typical of the Stags Leap area of the Napa Valley. Quixote prides itself on its estate Petit Sirah. We tasted two, an ’05 and an ’02. The ’05 was quite nice with strong flavors and a bone dry finish but the ’02 was really good although at $70 a bottle it was too steep for my modest means.

I did buy a bottle of the winery’s ’05 Grenache-Mourvedre blend ($40 a bottle), which René said is quite a rare blend. This wine had just a great balance of fruit and acidity and it was really approachable. John, who enjoys wine, but readily admits to being a novice said he could just drink it all day. On the palate the wine had red fruit flavors like a little bit of strawberry and a nice clean, finish.

A visit to Quixote Winery brings you to an intriguing intersection of art and wine. Such a combination can be found at other wineries, but exploring the relationship and similarities of fine wine and fine art is too complex for my simple musings. Instead, I’ll just say that the art inherent to the building broadened your understanding of what a space can be and prepared your palate for the artistry of winemaking. 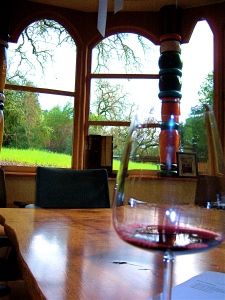 The Art of Hundertwasser can be found in every corner of the winery. Even the bathroom was pretty wild.