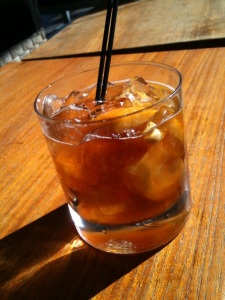 I say Bertie, another Pimm's?

Lounging in the plush couches on the veranda, we sipped cocktails and chatted but for the most part just luxuriated.

The clank of Bocce balls resounded every now and then as well as an outburst of laughter from some of the other guests. Waiters and waitresses moved between the tables, to ensure every class was filled.

Sure, the day is pleasant and the summer evening is long. One more. Make it a Pimm’s cup. Pimm’s No. 1 is a gin infused with various flavors that are said to be almost a state secret in England. The brown colored liquor is poured over ice and mixed with a variety of fruit and sometimes even cucumber slices.

Oh, this Pimm’s just doesn’t have enough fruit. Excuse me, could we have a few more orange and lime slices?

The Pimm’s is the favored summer beverage of the British and as we enjoyed our early evening drinks on the patio it’s easy to see its summer appeal.

But the name, “Pimm’s,” which you can’t even say without sounding like a Brit and the gingery taste, are just a little too British for this American and especially on the recent Fourth of July weekend.

“Just a shame about that oil in the gulf, I say.”

“Yes, quite distasteful, but leave it to those Americans to try and make a dollar out of it with all those claims on BP, you wouldn’t see that behavior if a North Sea derrick leaked a little oil. Hmmm,  I say more Pimm’s?”