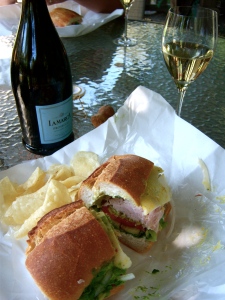 A proper turkey sandwich served up by the pros at the Broadway Market in Sonoma. I enjoyed the sando with a little Italian proseco, very tasty.

It’s not that interesting, not that gourmet but there’s just something great about a good turkey sandwich. I’m talking about the ones from some of the best delis in Sonoma or Napa. This is kinda weird, but around here a solid turkey sandwich is expected and respected. I’ve never really thought of them as special until I traveled the world a little bit and couldn’t find that same combo of a fresh smoked or peppered turkey on a hard sourdough role with pepper jack cheese, tomatoes (when in season) onions, peppers, lettuce, pickles (not for everyone but those folks are weirdos, yes Cody, I think your pickle aversion is a little weird) mustard and mayo.

The meat is stacked high, the ingredients on top make a heady mix of flavors and the bread is key. You can’t have a great North  Bay deli sandwich without the sourdough. The crusty bread can be a little messy because the sandwich fillings can kind of slide out when you bite down, but that’s just part of the fun of eating the sandwich.

My current favorite in Sonoma is the venerable Broadway Market, but the Sonoma Market is also solid. In Napa, I’ve got to go Genova’s for the best but Vallerga’s Market is a close second. Brown’s Valley Market, also in Napa, has a solid sando but their butcher is really the only reason to shop there.

Up valley, in St. Helena you’ve got to go to Giugnis. Simply awesome. When I worked at Beringer I had to make a lunch run at Giugnis at least three times a week. They used to have a Cajun Turkey that was just amazing. It was smoked turkey with a rind of peppers and spices that was awesome. Cajun turkey, sour roll, jack cheese, sprouts and yes the juice. You always have to get the Giugnis’ Juice, a savory mix of olive oil, herbs and a little vinegar that’s the final complement to the sandwich.

In Lodi, there’s a great butcher shop called Fiori’s. Good meat and the best sandwiches in town, although they couldn’t do a proper turkey. They didn’t have the right bread or the right toppings. My Lodi friends would vehemently disagree with me, but I remember my first impression was  not bad but it ain’t what they got back home in the North Bay.

I don’t know, am I off base here? Is the turkey sandwich something special in the North Bay or is it just my own personal affinity. I think the deli sandwiches are just better around here, but I’d love to hear about great sandwiches elsewhere.

(Congrats to longtime friends of the blog John and Heather on the wonderful addition to their family, a healthy baby girl.)

1 thought on “Just a turkey sandwich”